Time for yet another birthday card.  This is for a friend whose favourite colour is orange.  I don’t “do” orange, so I thought I would struggle, but I found a lovely card here, and have cased it and put my own spin on it.

Using the Bulrush stamp from Wildflowers and Black Soot ink, I stamped a larger piece of white cardstock , stamping off to add dimension.  I then cut the “best” part of the picture, using the largest of the Classic Rectangles die.  Image was then sponged with Wild Honey, Dried Marigold, and Spiced Marmalade inks, and the edge sponged with Black Soot ink.  The image was then layered on orange and green cardstock with double sided tape.  The sentiment was stamped using Spiced Marmalade ink, and layered on orange and green cardstock with foam tape. 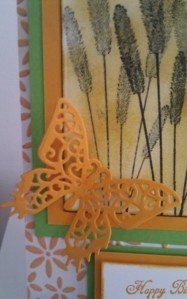 I embossed a piece of white cardstock with the A side of the Splendid embossing folder, and sponged this in Spiced Marmalade.    The butterfly was cut using Les Papillions die.